The rate of suicide among adolescents is increasing in the US, yet many adolescents at risk remain unidentified and receive no mental health services. The CASSY is the first universal screen for suicide risk in pediatric emergency departments or anywhere large-scale suicide risk screening occurs. The CASSY is a computerized adaptive test (CAT) that represents a scientific breakthrough in pediatric suicide risk screening and measurement. The CASSY is cloud-based and scalable to any size population via a HIPAA secure Amazon Web Services (AWS) platform, meaning that youth can be screened, measured, and monitored in or out of the emergency room or clinic.

The 72-question item bank covers suicidal ideation and behavior, and suicide related items drawn from the domains of psychopathology, PTSD, social adjustment, sleep, substance use, anger, and aggression. The mean number of adaptively administered items is 11 (range, 5-21). In an average of 84 seconds, youth can be adaptively screened for suicide risk and their suicide risk quantified in terms of the probability of a suicide attempt in the next 3 months. This process can be further streamlined by integrating with our API so that the CASSY can be seamlessly integrated with an electronic health record system. The CASSY is available in English and Spanish, with built-in selectable audio to aid in literacy issues and further ease of use. The Flesch Reading Ease score for the CASSY is 80.4 with a Flesch-Kincaid Grade Level of 6.0.

The CASSY was designed to be a screener used in pediatric emergency departments. The CASSY provides a suicide risk stratification (from negligible to very high risk) based on the prediction of suicide attempts within 3 months in a sample of almost 5,000 youth in pediatric emergency departments. The risk stratification is based on the estimated probability of a suicide attempt in the next 3 months.

The K-CAT® Suicide Scale was developed using the same statistical methodology, computerized adaptive testing (CAT) based on multidimensional item response theory (MIRT). The K-CAT® was validated against point in time structured clinical interviews to assess suicidal ideation and behavior. The fundamental difference between the CASSY and the K-CAT® Suicide Scale is that the CASSY is a suicide screener and risk stratifier, whereas the K-CAT® Suicide Scale is a dimensional severity measure of suicidality. As such, the CASSY should be used for screening youth for imminent suicide risk, particularly in pediatric emergency departments, whereas the K-CAT-SS should be used for repeated longitudinal assessments to evaluate the effect of treatment on suicidality or to monitor youth for the emergence of suicidality. 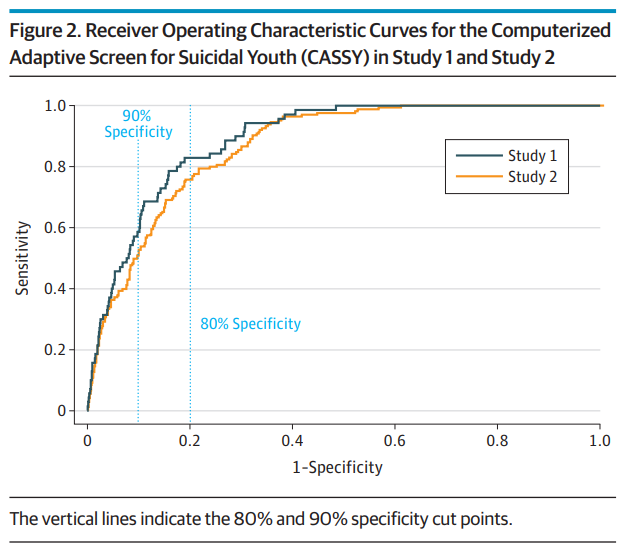 Validation of the CASSY

As published in JAMA Psychiatry.

The CASSY was calibrated using a sample of over 6,000 youth in pediatric emergency departments and almost 5,000 youth followed for 3 months and prospectively assessed for suicide attempt. The CASSY had excellent predictive accuracy for suicide attempt (AUC, 0.89 [95% CI, 0.85-0.91]) in study 1. At a specificity of 80%, the CASSY had a sensitivity of 83%. It also demonstrated excellent accuracy in the study 2 validation sample (AUC, 0.87 [95% CI, 0.85-0.89]). In this study, the CASSY had a sensitivity of 82.4% for prediction of a suicide attempt at the 80% specificity cutoff established in study 1.